Not to be confused with Dzików/Tarnobrzeg 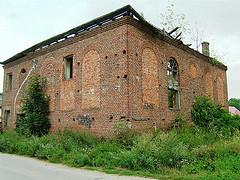 Dzikow Stary is a village in Lubaczow County in southeastern Poland located in the foothills of the Carpathian Mountains. Documents show that the village was owned in the 15th century to the Ramsz family. Over time, village ownership passed into the possession of various families of titled Polish nobility and eventually in the 20th century to Baron Hugo Wattman.

Jews first settled in Dzikow Stary in the 18th century and were mainly farmers. When the Chassidic court of the Ropczyce - Dzikow (Tarnobrzeg) Rabbis became established here, increasing numbers of Jews were drawn to the area and expanded the settlement population.

Between the two world wars, the Jewish community in the village diminished following the departure of the Chassidic Court. For the most part, Jews in Dzikow Stary were Chassidic, so there were limited Zionist activity or youth movements.

During the Holocaust nearly all Jews suffered some form of humiliation or were killed. Since the end of WWII no Jews reside here.

In 2007, Andrzej Wajda, the Polish film director, made his most recent film in Dzikow Stary. The film, “Katyn”, is the story of the massacre of Polish officers by the Russian army in the Katyn forest during World War II.