On September 19, 1939 as the German Vermacht was entering the Dzikow Stary, they killed 3 Jews: A “Dayan” who came to Dzikow Stary his son in law and another local Jew.

The Germans continued to degrade, violate and torture Jews in the streets.

After two weeks of fighting, Russians seized control of Dzikow Stary and the area.

The fact that the border between the Germans and the Russians was not yet firmly set enabled Jews from the village to escape with the Russians, who after some days left the village.

In June 1940 the Nazis established a forced labor camp in Stary Dzikow. It operated as a branch/extension of the Bełżec concentration camp. Since the village was situated near the Russian border, the work camp became part of other labor camps, which their “main station” was Bełżec.

This camp was part of the fort fighting on the Russian border 140 kilometers from the rivers Bug and San. Nearby was a much larger the German fort fighting, “Oto Line” Jews were brought to the labor camp from Dzikow Stary and from other neighboring shtetls.

In the labor camp, Jews were forced by the Germans to build roads and to chop down trees for wood. Jewish prisoners detained there were accommodated in barns and were used for building frontier fortifications. Because of difficult living conditions, many of them died due to illnesses and exhaustion. The camp was dissolved in the fall of 1940. (1)

During three days in August 1940 a big group of Jewish workers came to Bełżec. In the beginning they had to lodge in primitive conditions because of lack of space for them. After several days they were sent to 20 different sub camps which were established in Bełżec and its surroundings.

Their main duty was building fortifications at the Soviet Union border: a rampart of 140 km between the rivers Bug and San. In fact, until October 1940 the “Eastern Rampart” was only 40 km long (between Bełżec and Dzikow Stary village), 2.5 m deep and 7.5 m wide.

The prisoners of the Bełżec work camps built a 6 km long part. This work was connected with the bigger plan of fortifications building, called Fall Otto (“Case Otto”) or “Otto Line”. (2)(3)

During that period, 1000 Jews were transferred to the village of Dzikow Stary from the nearby town of Cieszanów and from close villages and towns. Some of them died from hunger and diseases.

Later, the labor camp was evacuated and Jews were sent mainly to concentration camps and to other unknown places.

By the summer of 1942 some Jews were sent to the Ghetto of Lubaczow.

While killing, deportation and torture in the village of Dzikow Stary, in 1943 the SS shot 7 Jews in Dzikow Stary who were hiding.

A little light during those dark days was the rescue of the “Teheran Children”: February 18th 1943, among them 6 children from Dzikow Stary:

During the Holocaust 2 groups of Jewish children arrived to then Palestine with the Polish Army - “Anders Army”. (The army was named after the Polish General Anders who rebuilt the Polish Army during WW2 in then U.S.S.R)

The children with their families escaped from occupied Poland to eastern Poland and U.S.S.R. (Thus according to the secret Ribentrop - Molotov treaty of 1939 which let the Red Army of U.S.S.R, to hold eastern Polish territories)

On 1942, Polish refugees, among them Jews, found shelter under the “Anders Army” in U.S.S.R. Soon as the Anders Army arrived to Teheran, the Jewish Agency built a camp shelter for 860 Jewish children and 369 adults preparing them for “Aliya”.

The children came to Palestine through Jordan and others from Pakistan to Port Said (Egypt) and then by train from Cairo to Athlit (in then Palestine). 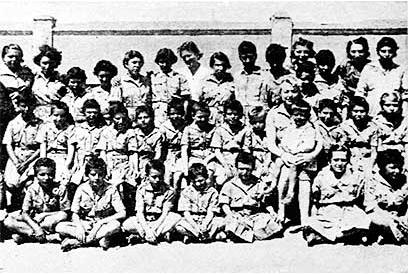 Above: The “Teheran Children” in Samarqand 1942 (image courtesy “Bitmuna”)

The children were accompanied by doctors, nurses and counselors. They were sent to live and study in several Kibbutzim and boarding schools. 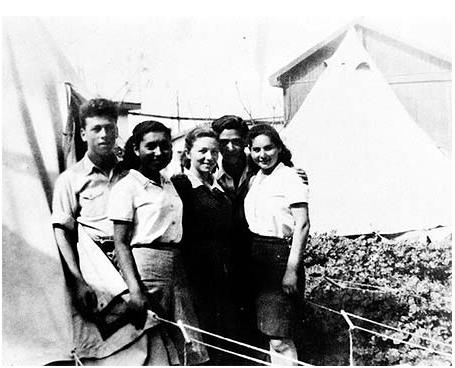 Twenty seven of them were killed during the Israeli War of Independence on 1948.

As mentioned before among the Children of Teheran were 6 children from Dzikow Stary: Adela, Lea, Lola, Rosa and Szymon Kupferszmidt. (4)

During the Holocaust six hundred Jews were deported/killed from Dzikow Stary. (5)

At war’s end a hand full of Jews tried to return to their homes, but former neighbors treated them with great hostility and had seized their properties, making life there unthinkable.

After the Holocaust, Jews did not remain in Dzikow Stary.

Stary Dzikow. This grove of trees grows on the site of a former Jewish cemetery.
Since it was discovered, local farmers have worked around the site, leaving these isolated trees to grow.
(Source: www.opendemocracy.net/arts/poland_4423.jsp)